Bob Seger — I Knew You When 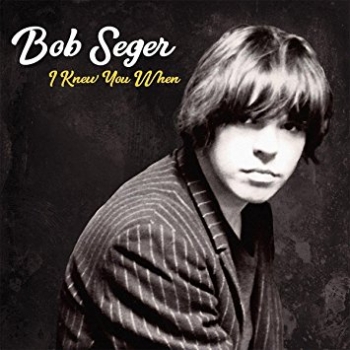 When rock fans mention the names of Rock’s superstars, they rarely include Bob Seger. They most certainly should.

Bob was born in the motor city of Detroit during more prosperous times. Like so many of that time period, his father Stewart worked for Ford Motor Company. Stewart was also an amateur musician and played several instruments exposing his son to lots of music at a very age.

In 1961 while still in high school Bob became a member of a band called The Decibels. The band broke up despite the Seger penned song “The Lonely one” being recorded and being aired on a local radio station (it was the first of many songs written by Seger that would be played on the radio).

After playing with a few local bands and making close music friends like Glenn Fry, Bob wrote a song called “East Side Story” that was recorded for a small Detroit label. It sold 50,000 on a local level and caught the attention Cameo-Parkway Records of the Philly based label that was real hot at the time. That led to a couple of very minor hits.

Then Cameo-Parkway suddenly went out of business. Seger was sought after by both Motown and Capitol Records. While it was tempting to sign with the legendary local record company, Bob felt that Capitol was a better fit given genre of music.

The group called The Bob Seger System finally scored a hit in 1969 with the single “Ramblin’ Gamblin’ Man” that peaked at 17. The backup singer of the song was old friend Glenn Fry. After that it would be a few more years before Seger had another hit with his new band The Silver Bullet Band that was formed in 1974.

In 1976 the huge success that was just out of reach for Bob, finally arrived. One of the best live LPs ever done called LIVE BULLET was the vehicle that drove Seger to the top. The album went platinum.

That was followed by six more platinum albums in a row! Not only was Bob Seger a stable on album stations, but with numerous big hit singles he was now an established star. These songs were filled with lyrics that most of us can relate to. Somehow since Bob and I shared similar high school experiences (we even both ran track) I could relate to his lyrics more than most. I was also delighted to learn in an interview that Bob, like myself, learned about all kinds of music by listening to radio up and down the dial from all over the country.

Soon Bob Seger was a favorite of the Hollywood crowd (“Hollywood Nights”). In California he reunited with his old friend Glenn Fry and co- wrote “Heartache Tonight” with Glenn. The members of The Eagles also acted as backups for Seger on some of his songs. Glenn and Seger also co-wrote an Academy Award nominated song from the film “Beverly Hills Cop II” called “Shakedown”.

For a good part of the 80’s and 90’s Bob Seger was more of dad than a performer. From the 1986 release of LIKE A ROCK until the 2006 release of he released only two albums with an eleven year gap between IT’S A MYSTERY (1995) and FACE THE PROMISE (2006). FACE THE PROMISE gave Seger another platinum LP. Then another gap until 2014 when RIDE OUT was released.

The death of some artists that Bob respected along with the passing of his friend Glenn Fry, put Seger in a very reflective mood. He had done so much more than he ever expected. When he first started out of Detroit he gave himself a few years to have fun with music and then get a real job.

This reflection on his career, his high school days and the life of his good friend Glenn Fry was the inspiration for the latest Seger album I KNEW YOU WHEN. There are two songs for Glenn the title tune and “Glenn’s Song”. He also did covers of the Lou Reed tune “Busload of Friends” (Better than the original) and a great version of Leonard Cohen’s “Democracy”. These and originals up to the standard of his writing make the end result into a very solid album that should make all Bob Seger fans very happy.

When asked in conversation a few years ago when he might retire, Seger said that as long as his voice quality doesn’t start to go, he’ll carry on. If he feels any drop in quality, he will quit. He didn’t want to be like some old singers that hung on long after their talents were mere shadows of their former selves.

However, just after the release of the current album it wasn’t his voice, but his health that became an issue. On September 30, 2017 Bob woke up to find that his leg was dragging. It turned out to be a painful ruptured disc. Doctors told him that he would have to cancel the tour that was scheduled to support the release of I KNEW YOU WHEN. While he says that he is feeling a little better he still can’t even play an instrument. This leaves the sold out tour in limbo. We can only hope that rugged sounding voice will soon be able to grace the stage very soon. Get well soon Bob!

Tweet
Published in News & Events
More in this category: « Phil Collins — Not Dead Yet 88+ Ways Music Can Change Your Life By Vincent James & Joann Pierdomenico »