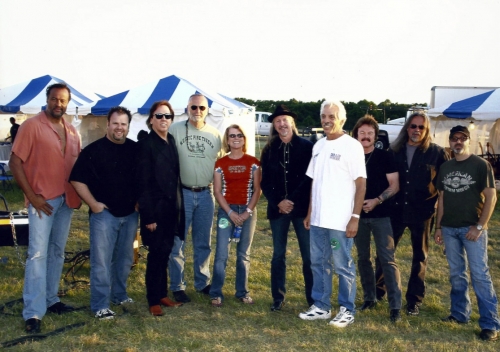 Debbie Calton, T. Morgan and Tony Harris hanging out back stage with The Doobie Brothers

While the lineup has gone through some changes over the years, the spirit of the band has not.  In fact, they are passing on that spirit to a new generation.  Lana Johnston, daughter of founding member Tom Johnston will be opening on select dates this summer with the band.

Patrick Simmons, Jr son of another founding member Patrick Sr, will also be touring with the band when he is not working on his on solo album.  His father is also producing the album.

While there is no one named Doobie (a made up name as a joke) these brothers of music have scored five top ten singles including two number ones.  The first album remains almost unknown, but starting with their multi-platinum second LP TOULOISE STREET, The Doobie Brothers have 3 multi-platinum, 7 platinum and 14 gold albums to their credit. Their GREATEST HITS album sold 12 million copies and made it to the very rare Diamond Award level. As if all that wasn’t enough to make them a musical institution, they have also been awarded four Grammies.

“Listen to the Music” their first big hit is pretty typical of the attitude of the band.  Music is a mixture of all kinds of influences that come together to make a joyful sound.  In this hit song The Doobie Brothers asked this question. “Why can’t the leaders of this world get together and listen to the music together?  Unfortunately they and we are still waiting for the answer.

WMGK's Big Gig featuring The Doobie Brothers and The Steve Miller Band will be held at the Susquehanna Bank Center on September 5, 2015.  Click here for more information: http://wmgk.com/event/mgks-big-gig/