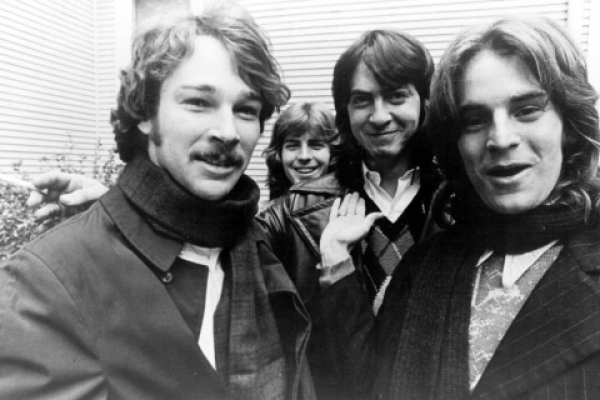 On a closer look, it was noted that Alex Chilton was a member of the group. I certainly remembered him from his days as the lead singer of another group called The Box Tops.   They had a number one record gold record called “The Letter” in 1967. It stayed at number one for four weeks and was the number two record of the year overall according to Billboard Magazine.  It went on to be a huge hit around the world. They had a big follow up hit in “Cry Like a Baby” and the 16 year old Alex was on top of the world.  His voice didn’t sound at all like his age.  That rough edge he had was perfect for what was to many the first of the "blue-eyed soul" hits.

Like so many groups that sky rocket up the charts, by 1970 the Box Tops were already finished. While the name continued through 1972, they did so without the talents of Alex Chilton.  He surprised many in 1970 by leaving The Box Tops. He back to Memphis where he was convinced to join up with the talents of Chris Bell to form Big Star.  Chris Bell was the founder of the group and its leader.  It was Chris, not Alex, who wrote most of the songs and was the driving force behind the band.

Still, it was Alex Chilton that led me to give Big Star a listen. One listen was all that you needed.  Unlike most albums that come out, there were many outstanding tracks that seemed to have single hit potential.  “When My Baby’s Beside Me” and “Don’t Lie to Me” jumped out, but there were other great tracks like “The Ballad of Goodo” and “In the Streets”.

The group recorded at one of the best recording studios in the world.  Ardent Studios was the birth place of so many great albums and this Big Star record belonged right up among the many hits that came out of this outstanding studio. There may have been one notable difference that led to the group never becoming a household name.  Unlike the other huge hits that came out of Ardent Studios, Big Star was on this new Ardent label.  While Ardent Studios were among the best in recording artists, they had little or no knowledge of how to promote and distribute their product on this new label.

The only thing that mattered to me was the quality of the music.  Big Star certainly passed that test and we started to play them on the air.  That led to a phone call from the label’s promotion director, John King.  He was very excited that a major station like WIBG in Philadelphia was behind the record.  Apparently we were the first major market radio station to show any interest in Big Star.  John and I talked for some time about what I thought of the band and their potential.  John liked what he heard so much that he wanted me to write and produce a national radio commercial that would be used to promote the band across the country.

As it turned out the problem wasn’t the music or the promotion.  The problem seemed to be in distribution.  At WIBG we called record stores to find out how well records that we were playing were selling.  This was a major factor for us in continuing to play our current list of records.

It was the band that paid the price.  Despite glowing reviews from all over the country (Rolling Stone Magazine was especially excited about Big Star), Big Star faded away.

It remains one of the real shames of rock music that Big Star never made it big.  They did reach cult status and did influence many so called “Power Pop” bands that followed with great success.

Chris Bell was never able to recover from not achieving the kind of popularity that he was so certain that Big Star attain. While the band tried to carry on without him, Chris left the band after the failure of the initial LP.  His life went into a tailspin.  He died way too young.  On December 27, 1978 Chris lost control of his car and died in the resulting crash. Ironically, he finally joined many famous rockers like Jimi Hendrix, Janis Joplin and Jim Morrison.  They too all who died at age 27.

More insight on the band Big Star can be seen in a great movie called BIG STAR –NOTHING CAN HURT ME.  (The definitive story of the greatest band that never made it).

Tweet
Published in The Archives
More in this category: « Ric Lee and Ten Years After Captain Beefheart (Don Van Vliet) »