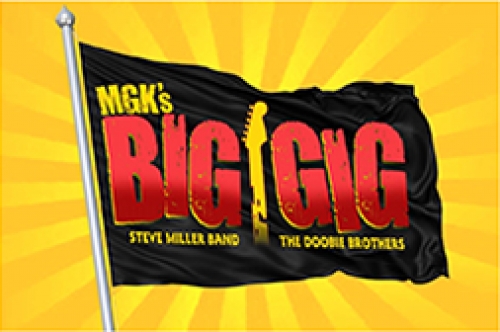 A very special performance of a band of all -star local musicians led by The Hooters’ drummer David Uosikkinen followed. They do a review of the best of Philly music in their own unique style. Many old favorites of local bands of years gone by float in and out of the band. Members of The Hooters do often appear, but they were not on stage last night. Instead some twenty great musicians did perform. Artists like Richard Bush lead singer of the A’s did their best song (that should have been a huge International hit) “Women got the Power”, Jeffrey Gaines, Ben Arnold, Tommy Conwell, Steve Butler, and Richie and Charlie Ingui of The Soul Survivors made for a fantastic trip down memory lane. Even the younger audience (and there was an amazing number of them present) appreciated their lively set. If you missed them, you owe it to yourself to see them play the next time they are in town.

The Doobie Brothers, who have been together since 1970, were up next. After 45 years the band is still cooking! While the lineup has gone through some changes over the years, the spirit of the band has not. Founding members Tom Johnston and Patrick Simmons led the way. One great addition was the keyboard player from Little Feat, Bill Payne.

The four time Grammy Award winners wasted no time getting the audience on their feet by opening with “Jesus is Just Alright.” That momentum continued until the middle of the set. Then oddly the group then chose to do a couple of their much lesser known album cut tunes. Despite some absolutely brilliant two, three and four part harmonies, the packed house seemed to lose interest. That interest was quickly revived when the group did “Takin’ it to the Streets” and a string of other hits that finished with a rousing version of “Listen to the Music”. All in all, most felt it would be hard to match the Doobies set.

Steve Miller was up to the task. While he too did some songs that the audience probably did know in the middle of the set, the selections were more interesting. Steve’s introduction of these songs helped. He spoke of how these songs influenced him as far back as his early days when he was 12 years old and formed his first band. That first band, that included his longtime friend Boz Scaggs, actually got jobs at frat parties, etc. That made for some very funny stories. Steve also explained how a song he played called “One Mint Julep” originally done by The Clovers, helped shape his own song writing.

Even the acoustic set, which often prompts the crowd to go to the snack bar, kept the audience’s attention. Very often you can hear the crowd loudly talking during such a set, but for the most part, the fans loved it. Of course, as always, one clown in the audience took advantage of the softer moment to yell out “Free Bird”, but thankfully he was ignored by all and the set proceeded.

The last part of the show kept the audience on their feet. Steve went from one great hit to another. In listening one could only wonder why in the world is Steve Miller not in the Rock and Roll Hall of Fame? If everyone in this audience had a vote, Steve Miller would be in by a landslide.