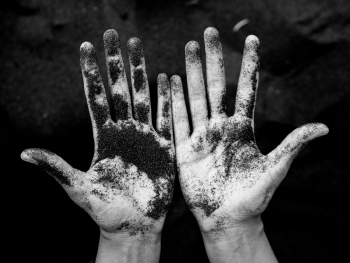 Sting was also a tax officer...In addition he also worked as a bus conductor and in construction.

Elvis Costello also had a desk job. He was a data entry clerk for both a bank and for Elizabeth Arden.

Gene Simmons also had a hand in the women’s industry. He was an assistant editor for both Vogue and Glamour magazines.

Speaking of jobs in the women’s industry, Malcom Young worked at a bra factory. No, thankfully, he didn’t make them. He was a mechanic who fixed the sewing machines when they would break down.

Working in a toy factory might seem a lot safer and maybe even fun. That was not the case for Patti Smith. The details of her experiences at the factory are like a bad dream. She was always being bullied by the other female workers. They went so far as to force her head into an unflushed toilet. That job led her to write a song about her treatment.

Hopefully Jon Bon Jovi got better treatment from Santa. He worked as a Christmas decorations assembler. I’m sure he could give you a better understanding of what he job entailed than I can.

Van Morrison wrote a song about one of his jobs. It is called “Washing Windows”. He was one of those guys you see every once in a while cleaning windows while dangling on the side of a high rise buildings. Not something that I would want to do for certain.

Ozzy Osbourne also worked in construction and as a plumber trainee. Those jobs didn’t get him ready for his act so much as being a horn tuner in a car factory or a slaughter house worker. In the slaughter house he tore open cows.

David Bowie didn’t slaughter cows but he did work as a delivery boy for a butcher. He used the money he made to take lessons on the sax. He took those lessons from Ronnie Ross. Some eleven years later, when David produced “Walk on the Wild Side” for Lou Reed, he asked Ronnie to play that haunting sax on the song.

Ringo Starr was a high school dropout so the best job he could find was working for minimum wage as a delivery boy for the British Railways. Mostly he just delivered messages. Doesn’t sound like a
”hard days night”.

Keith Richards was different kind of boy. His parents were very much into tennis and got him a job as a ball boy. It is hard to imagine Keith ever moving quickly enough to get that job done.

Keith’s sidekick, Mick Jagger, worked as a porter at Bexley Psychiatric Hospital. His job was taking mental patients around the grounds. Maybe that is where he got some of the ideas for his songs. He also sold ice cream at the beach.

Digging graves might play on your mental wellbeing. That is what Rod Stewart did for London’s Highgate Cemetery. He also played pro soccer. See the story on rock stars who were athletes.

Freddie Mercury and Roger Taylor of Queen had their own stall in the very popular Kensington Market in London. They were so successful selling art and fashion items that they kept it open even after making their first album.

Jack Black the actor/musician was a telemarketer before hitting fame and fortune. Somehow that seems to fit. I’ll bet he was good at talking people into buying.

Deborah Harry was a waitress and then a Playboy Bunny in New York City before she became the voice of Blonde. One would think that was much better preparation for her than some of the jobs listed above.

That’s just some of the jobs Rock stars had prior to hitting the big time. More probing could turn up many more. Perhaps even enough to be able to write a part two.