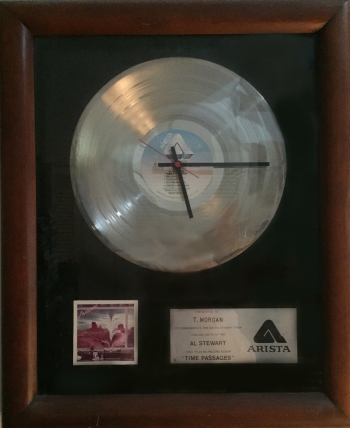 Most of the Rock stars that Philadelphia FM radio launched during the 70’s were heavy duty rockers who were more than loud enough to shake places like the old Spectrum. Very few of those who gathered fame and fortune during that decade were singer songwriters. Certainly none were as “nerdy” as Al Stewart. He did a show at the Spectrum and seemed almost lost on stage doing an acoustic set.

That didn’t keep fans from falling in love with his very heady music. This Scottish modern day ballad writer released his first album called BEDSITTER IMAGINES in 1967. That LP went practically unnoticed. The second one, released in 1969 called LOVE CHRONICLES, did get our attention at the radio station. This was a very personal album. The title tune was 17:55 long and it was a diary of sorts of the women he had known. It wasn’t a case of a man bragging about how many women he had, it was more of a way of pointing out the lessons he learned. Al’s message was that there’s a huge difference between making love and actually loving someone. The latter is much more satisfying. The message was pretty much lost since most stations didn’t play it because of the language that was used.

We did edit the album and it was somewhat popular with our audience. So were the next two: ZERO SHE FLIES (released in 1970) and ORANGE (released in 1972). As is often the case in the music business, these albums started to build a small following for the music of AL Stewart. It was the 1972 release of PAST, PRESENT AND FUTURE that finally put Al on the album charts in the US. The songs on the album reflected his love of history, Russian literature, and the predictions of Nostradamus. The album showed a different side to the music with a rock band backing him up. By many accounts, this was his best album.

The upward movement continued with the 1975 release called MODERN TIMES that broke into the top 30 on the albums charts. He was now on the verge of huge success.

That success came with the 1976 release of YEAR OF THE CAT. The album made it to number 5 and the title tune made it to number 8 when it was released as a single. After the big hit I sat down with Al for a bit of a chat. He was very bright and engaging with his passion for Russian Literature and anything to do with World War Two. He is an avid reader and it was like having a conversation with a college professor.

During our talk he told me the story behind “The Year of the Cat”. It all started when he was on the road. In the middle of the night he woke up in some motel with the title and a few ideas of where to go with it. He scribbled them down on one of those small note pads on the night stands at most hotels. A lot of songwriters will tell you their best songs seem to come out of nowhere and take just minutes to write them. That was not the case with “Year of the Cat”. It took a year for Al to complete the rest of this masterpiece. The album went Platinum.

So did his next album TIME PASSAGES released in 1978. It seemed however that his “folk rock” style that got him a lot of air play on the so called adult contemporary stations and a wide range of fans, was also the start of his downfall. Many of his early fans didn’t like his new more polished music and Al himself preferred performing solo or in a more acoustic setting.

His next album called 24 CARRETS released in 1980 was the last LP he made that made the charts. Some 9 albums later he seems to have been totally forgotten, but Al is back on tour with a sparse backup and in very small venues where you can get up close and personal. If you do go see him, be ready for an enchanting, intelligent night of music.