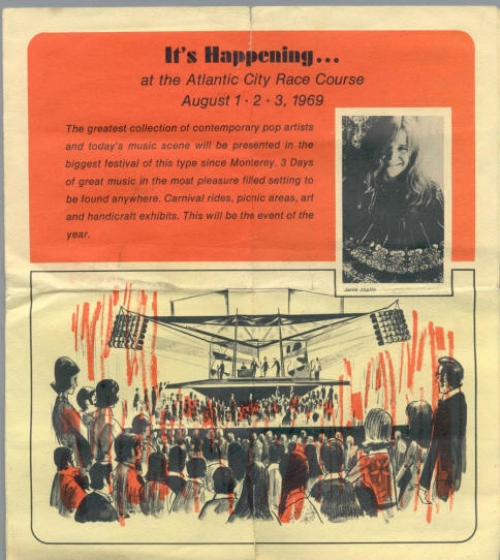 The event was put on by the Electric Factory Concerts of Philadelphia under the guidance of Larry Magid.  In his book “My Soul’s Been Psychedelized – Electric Factory”, Larry points out that things went smoothly for the most part thanks to the Buckminster Fuller designed stage that rotated like a turntable.  This allowed groups to set up while another group was playing.  When one act finished the stage just rotated and the next act was off and running.

And what a great line up of acts!  Virtually no one missed the no shows (Crosby, Still & Nash and The Moody Blues were initially listed as being on the bill) with so much star power. Check out this weekend of music.

Chicago, The Chambers Brothers (who ended the night with people dancing to “The Time has Come today”, Iron Butterfly, Joni Mitchell (who walked off stage after a song claiming that no one was listening), Procol Harum (did a sensational version of “A Whiter Shade of Pale”), Mother Earth (lead singer Tracy Nelson did goose bump versions of “Mother Earth” and “Down so Low”,  AUM. Booker T & The MG’s and Lothar & The Hand People.  Johnny Winter (couldn’t play because of equipment problems)

The Jefferson Airplane, Creedence Clearwater Revival (one of the hottest groups in the world at the time), B B King, Tim Buckley, Paul Butterfield Blues Band, The Byrds, Lighthouse, The Crazy World of Arthur Brown, Hugh Masakela, and The American Dream (the only local band to play who shared stories with me about what was going on back stage - it was one big party).

Janis Joplin and The Full Tilt Boogie Band (she never sounded better doing “Try” and a “Maybe”), Frank Zappa and The Mothers of Invention (who were not happy about going on at four in the afternoon, but you would never know it from the great set they did), Canned Heat, 3 Dog Night, Santana (making his first east coast appearance with Janis Joplin and Mama Cass introducing him as their favorite band), Buddy Miles Express, Dr. John (in his night tripper persona spread his gris-gris magic dust all over the audience), Joe Cocker, Buddy Rich, Sir Douglas Quintet (Leader Doug Sahm called the AC POP Festival the best festival he ever played) and Little Richard (who played on a white grand piano).

I wasn’t present for the entire three days (I had to be on the air), so this is as close to a complete list as I can find.

You got all this great live music for $6 a day or $15 for the entire weekend!  It attracted a total of 110,000 rock fans for the entire weekend. That comes to an average between 30-40 thousand tickets for each day.  The only real bummer was that no one recorded the event on tape or on film with sound.  It is a real shame because it is unlikely such an undertaking will ever be done today.

July 2018 Update: A 30-minute YouTube video from an ABC news crew that had some concert footage (with sound) was posted then deleted (https://www.youtube.com/watch?v=QOTsYV6Wvf0). It was the only known video with sound of the festival that is known to exist at this current time. If the original or another source is found, we will post it here!

For a video without sound, see here.

For a Canned Heat video w/o sound see here.

In 2019 the Philly Inquirer posted a long story with photos on the AC Pop Festival here.

In 2019 The Atlantic City Press put together an extensive photo gallery of the event that can be found here.

Tweet
Published in The Archives
More in this category: « The National Pop, Jazz and Blues Festival In the beginning… »