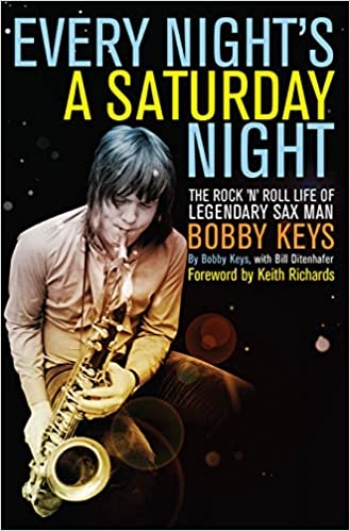 Once realized that it was possible to play the lead and not just be a background player, Bobby decided that he was going to make career out of music. At the early age of 15 he started touring with another native of Lubbock, Buddy Holly. He also worked with another Texan star, Buddy Knox.

It was while playing in the Bobby Vee band in 1964 that he was noticed by another group on the bill. Keys was very impressed with the way The Rolling Stones approached Rock music. They were different and bolder than most the bands at that time. He certainly thought they were more exciting than playing back up to artists like Bobby Vee. The Stones even played a Buddy Holly song.

The Rolling Stones noticed him too. They struck up a conversation and Bobby learned that he and Keith Richards shared the same birthday. They struck a friendship that lasted until Bobby died in 2014.

However, Keys didn’t start playing with The Rolling Stones right away. They were a guitar-based group and they didn’t think they needed a sax player. That changed in 1969 when the Stones wanted to do something different with their sound. Keith stepped up and suggested that Bobby to play on the LET IT BLEED album. It seemed to be a natural addition and the Sax player fit like a glove.

After the success of “Brown Sugar”, “Can’t You Hear Me Knocking” and “Rip This Joint”, Bobby stayed on to do the STICKY FINGERS record. After that Keys became a fixture in the band and went on tour with the group.

Mick Jagger soon also became his friend. They were such close friends that Bobby was asked to serve as his best man in one of Mick’s weddings. All was well until the 1973 tour.

It was more than evident that Bobby shared more than a friendship with Keith. Unfortunately, they all did a lot of drinking and drugs that led to them doing some offstage antics together that didn’t sit well with Mick Jagger. Bobby also became part of the famous “Lost Weekend” crows that included the likes of John Lennon.

The drugs and drinking soon got in the way of performing. In the 1973 tour, Keys suddenly was no longer with the group. There’s more than one story told as to exactly why he left. It is said that Jagger fired him, while Bobby said in his Autobiography that he left when he realized that he had to come to grips with his addiction problem.

Bobby was always in great demand. The Sax was a way of him expressing his emotions. That emotional playing led to some explosive contributions to many records. He appeared on albums by George Harrison, Lynyrd Skynyrd, John Lennon, Eric Clapton, Joe Cocker, Delany & Bonnie and Harry Nilsson. His sensational performances on Clapton’s first solo album, his playing on the Joe Cocker Mad Dogs tour and his playing on ALL THINGS MUST PASS are legendary.

Once Keys came to terms with his personal issues, it was his old friend, Keith Richards who got him back in the fold of The Rolling Stones. While rehearsing for the 1980 tour, Keith talked Bobby into sneaking into the practice session. When the band started playing “Brown Sugar’, Bobby just jumped in as if on cue. It was like he never left. Even the surprised Jagger had to smile and let him back in. This time he stayed until his death.