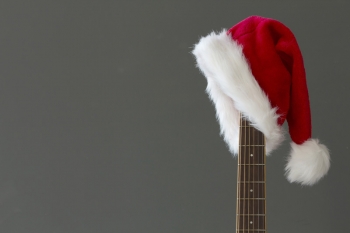 You may not think that this is not a real Christmas song given that not only did they leave Christ out Christmas, but it is really an anti- war song. Be that as it may, it is such a beautiful presentation with much of the spirit of the season incorporated in the song that it hard to not list it.

“Thank God it is Christmas” by Queen

Many consider this to be the best Rock Christmas song of all time. While I don’t go that far, it belongs on any list of songs to celebrate the season.

The Beach Boys are the only artists to have two songs on the list. And they were both released in the same year... 1964.

This song was recorded live at a concert in 1975. It first circulated as a bootleg tape, but became so popular that the record company released it.

Alright it may be just a redo of his hit “Little Queenie”, but works so well. Since its release in 1958 several artists have covered the song. The Keith Richard version stands out over the other covers.

“I believe in Father Christmas” by Greg Lake

We may have lost Greg Lake but this song will make music fans remember him for years to come. It simple and beautiful.

While some would consider this to be a country, it rocks enough to ne a least a Rock-a-Billy classic. The 1957 release has been redone by many. The best of those are Hall & Oates and Billy Idol.

“Rockin’ Around the Christmas Tree” by Brenda Lee

Another 1958 release that could be considered country, the title tells you otherwise. It certainly has become a stable to a point where many people have forgotten the many other hits she had in her teems.

“Step into Christmas” by Elton John

A call to celebrate the time of the year. You can be sure this will be played every year by all the Rock stations. As well it should.

A very much like the Elton song, this an up and happy song that can put you the mood. Paul may have been in good spirits and enjoyed the Christmas of 1979, but he certainly did have a happy new year. Right at the start of 1980 he and his wife Linda were arrested on drug charges.

This sad Christmas song done the king is one of many that came out in the late 50’s that were redone by several artists in an attempt to “modernize” the music. The original still works best.

“Christmas Wrapping” by the Waitresses

It doesn’t matter that practically no one can name another song The Waitresses ever did, this was a great original idea and one of the best Christmas songs of the 80’s.

“Please Come Home for Christmas” by The Eagles

This very sad song is so pretty that you almost forget that is heartbreaking. The harmonies and the strong emotions it evokes makes it better than the Bon Jovi version.

“Father Christmas” by The Kinks

Very typical of Ray Davies to write a song with humor that contains a message. Things haven’t changed much since the song was first released in 1977.

Like more than a couple of Christmas songs, this make you feel for those who are so far away from friends and family for Christmas. This especially true of those serving our country in the armed forces.

“Christmas (Please come home)" by U2

Another song that makes you happy that you have a circle to come home to at this time of the year. It is sadder if you can’t get home or don’t gave that circle.

“Christmas All Over Again” by Tom Petty

Sad to not have Tom Petty around anymore. He always tried his best to spread the spirit of Christmas all year round. While he is missed, we still have his song to help celebrate the holiday.

This one is included even though it is not an original like all the others because she does such a beautiful and more modern version of the classic. Whatever your faith or beliefs are, it is a time to remember the reason for the season.

MERRY CHRISTMAS & HAPPY NEW YEAR TO ONE AND ALL!!!