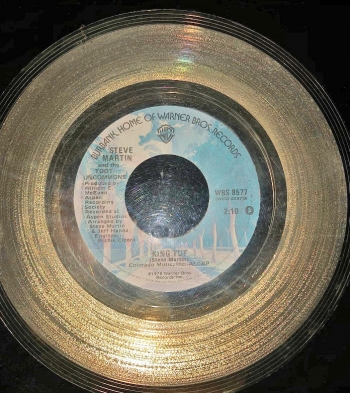 Growing up I can recall many silly records that not only made the hit charts but sold enough to become a gold record. As I look up at my wall of gold record awards, I see at least two that went gold that were totally novel. So novel that perhaps many people wouldn’t even understand the humor because they are so dated. “King Tut” by Steve Martin is a perfect example. How many even remember the record that sold a million copies at a time when the whole world was talking about King Tut.

It seemed like people were willing to laugh at almost any topic and weren’t offended - car accidents, bad marriages , mothers-in -law, schools, the government and many more social circumstances.

Things have changed. You can’t find humor in many subjects without becoming an outcast in society. One of the biggest hit novelty records of all time was “They’re Coming to Take Me Away, Ha Ha!” by the made-up name of Napoleon XIV. The record made it all the way to number three. It never would even have been released today. To be fair, there were many who thought that it shouldn’t have been released back then either. The man who was listed as having written the song is Jerry Samuels. Jerry Samuels never had another hit record using that name but did have two big hits using the name Scott Daniels. The different name may have been a result of the protests from those who thought the song was making fun of the mentally ill.

The two records that I mentioned at the outset as being Halloween favorites that have stood the test of time did so by making light of things that ordinarily would provoke horror. Perhaps it was in the way it was presented.

In the case of John Zacherle, it may have been a case of people already being used to his humor. If you read my story on him, you know that there was much more to the man than the character he portrayed.

In the case of Bobby “Boris” Pickett, he was imitating Boris Karloff as part of his night club act. It brought him cheers every night, so he decided to make a record using his act. It stands today as probably the most popular novelty record of all time.

Frank Zappa and “Weird” Al Yankovic both were acts that made humor an important part of their act. While they were miles apart in their ideas of humor, they both agreed that it is hard to play the music and have the audience accept you as real musicians.

Then there’s the case of Tiny Tim and his big hit “Tiptoe Through the Tulips”. Even after having interviewed him at length, I couldn’t figure out if he was putting on an act or he really believed that people liked his music.

There were two writers who could write songs that made you laugh and sometimes made you think at the same time. They were “wild” in their own way.

Shel Silverstein was a great interview. He was almost frantic during my time talking to him. The man was a popular author of books as well as a songwriter of many hit records. He was best known for appealing to young readers. Yet, he could easily move into writing songs like “A Boy named Sue” by Johnny Cash and “The Cover of Rolling Stone” by Dr. Hook that were both huge novelty hits.

On the surface, it would seem that Tom Lehrer was an unlikely person to write and perform funny songs. How do you go from being a math professor at MIT and Harvard to writing songs making fun of almost anything in our society. The range seemed to be endless from religion, to masochism, to dropping the big bomb. He even made fun of his own subject, math.

Does the world need a good novelty song right now? Perhaps we have gone too far to laugh any more. I sure hope not. I get it that we shouldn’t make fun of other people, but surely we can’t afford to be serious all the time.

Tweet
Published in The Archives
More in this category: « Spencer Davis — More Than A Band Leader Those Who Pave The Way, Often Don’t Get Their Day »