Johnny Winter: The Legacy Lives On 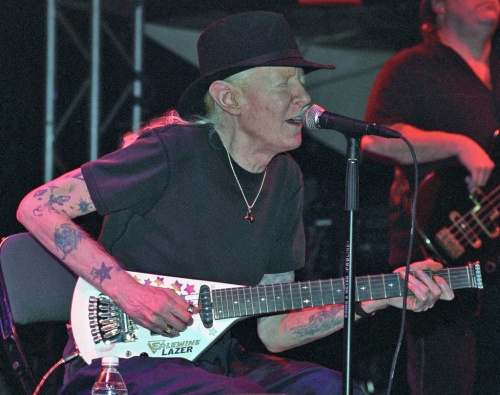 On July 16, 2014 one of the greatest guitarists that ever lived was silenced.  The 70 year old Johnny Winter was on tour when he was discovered dead in his hotel room in Zurich, Switzerland.  At the end of this tour Johnny was scheduled to re-join his brother Edgar for a tour of the US.  That tour was scheduled to touch down at the Keswick Theater in August.

It was just last year that Edgar Winter and Rick Derringer were part of a bill that included headliners Ten Years After at the Keswick.   Back stage I had a chance to talk to Rick Derringer who is one of the nicest and down to earth rockers you will ever meet.  He was willing to talk about almost anything including the days when he toured with Edgar and Johnny Winter.  During that time Johnny was looking for a signature tune that he could record and perform live that people would associate with him.  Rick wrote “Rock and Roll Hoochie Koo” just for him.  As it turned out, Johnny did not have a hit with the song, but when Rick did it in 1973 it reached #23 on Billboard's Hot 100. In fact it became his biggest solo hit.

That was pretty much the fate of Johnny Winter.  While everyone considered him to be one of the best ever on the guitar, it never translated into big hit records.  Ironically, that might just change after the fact.  Johnny has a new CD coming out in late August that is called STEP BACK  The stature of Johnny Winter was able to attract the talents of Eric Clapton, Billy Gibbons of ZZ Top, Dr. John, Joe Perry, Ben Harper and others.

Regardless how well the CD does, Johnny Winter leaves a real legacy behind.  It was Johnny Winter that first drew attention to the loud and raw Texas blues guitar scene that included Freddie King, Clarence “Gatemouth” Brown and Johnny “Guitar” Watson.  It was Johnny Winter who led the way and influenced the very successful Jimmie and Stevie Ray Vaughn.   In addition, Johnny produced Grammy award winning albums by John Lee Hooker and the legendary Muddy Waters.

If you are not familiar with the works of Johnny Winter, there is a real wealth of material to choose from. A real good starting point would be his version of Bob Dylan’s “Highway 61 Revisited” or the live album by a group that featured both Johnny and Edgar Winter called White Trash.  Johnny’s performance on “Still Alive and Well” is just sensational.