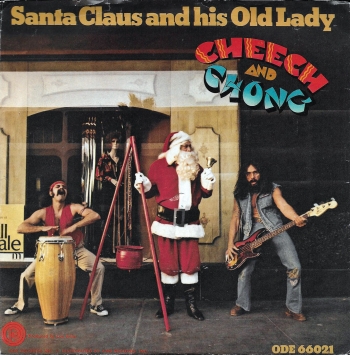 Cheech and Chong's Santa Claus and his Old Lady 45 Cover

While there are many of these Rock Christmas classics that have stood the test of time, there have been very few attempts at writing comedy bits. It is hard to do. You have to write around the topic of the season like Bob and Doug McKenzie did in their big hit “The 12 Days of Christmas”.

Cheech and Chong went about the task in a slightly different way. In their hit single “Santa Claus and his Old Lady” they tried doing a “hip” story about a traditional character and it worked. Yes, some of the material is dated and other parts are just plain corny, but somehow when it is trotted out every year people love it. In fact, if we didn’t play it we would phone calls asking why.

Despite the old druggie references and dumb jokes it still can make you smile. Of course after hearing it a couple of times, you are more than willing to wait until next year to hear it again.

In my book “Confessions of a Teenage Disc Jockey” I relate the story of when I had a chance to work with Cheech and Chong. Let’s just say for now that it was memorable.