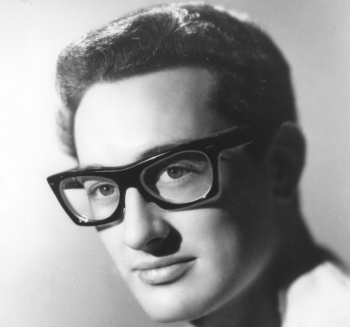 Many years later, when I was on the air at WIBG, I got a chance to talk to some people that were also part of that tour. It was part of a special T. Morgan birthday party where I was collecting things for a worthy cause. Anyone who brought me a “birthday gift” like food or clothing, would receive a gift from me. I wrote more about this night in my book “Confessions of a Teenage Disc Jockey”. For now I will just say it was a very special night.

One of the things that made it special was my on air interview with two guests known as Seals and Crofts. The duo was very hot at the time with hits like “Diamond Girl” and “Hummingbird”. Like Buddy Holly, Jim Seals and Dan “Dash” Crofts were born in Texas. After playing in some local bands they were drafted by The Champs to tour in the wake of their huge hit “Tequila”.

In our conversation they told me what a nightmare the whole tour was. Many on the tour were getting sick because of the cold drafty buses that they were all crammed into. Unlike today where rock stars travel in luxury, the “stars” were forced to endure lengthy bus rides (often over 300 miles on back roads) that would bounce them to and fro some remote portions of the country. This tour was all done in the dead of winter in the icy Midwest.

Rock concerts/dances were nothing like the concerts you might attend today. They were held in high school gyms, barns and small auditoriums. Each act would perform their one or two hits and then make way for the next act. There were many acts on the bill and the performers usually only got a chance to play for a matter of minutes before having to return to the long winding road.

Jim and Dash told me that they were getting pretty bored just playing the instrumental song “Tequila” every night. During the tour they struck a friendship with fellow Texan Buddy Holly and his band. They too were tired of playing the same songs every night. So they decided to do something about it.

The suggestion was made that they switch positions for a night or two. Jim and Dash became part of Holly’s band where they got a chance to sing and Holly’s sidemen got a chance to rest their tired vocal chords. Amazingly they got away with it. No even noticed.

They also told me that some of the legendary stories surrounding the crash were true. Buddy Holly was exhausted. He was desperate to get even one night’s good sleep. Even though it was very costly, he decided to hire a small plane to Fargo, North Dakota.

When word got out that a plane was going to take Holly north, lots of people wanted to join them. Holly wasn’t the only one who needed rest. Everyone who could afford it, wanted in on the ride. Originally Holly asked his guitar player Tommy Allsup and bass player Waylon Jennings to join him. Ritchie Valens begged to go. Torn, Buddy had Ritchie and Tommy flip a coin. Valens won the toss. Then J. P. Richardson, who was sick with the flu, convinced Waylon to give up his seat.

The plane never made it to Fargo. Just before 1 AM it went down some 6 miles north of the airport where they took off.

Tommy and Waylon, who became a huge country star, went on to play again. Waylon felt guilty about not being on the plane until he died.

In 1978 I was invited to the world premiere of “The Buddy Holly Story” held in Dallas, Texas. I never did understand why it was held in Dallas and not in Buddy’s home town of Lubbock. In any case, it was a true Hollywood style premiere. All the stars of the movie were there and the red carpet was rolled out. I actually felt a little silly walking on it since I had nothing to do with the movie.

Also in attendance was Buddy Holly’s window. When he died they were still pretty much a newlyweds. The film was so realistic that she got up and left before it ended. She walked right by me and I could see the tears on her face.

After the movie there was a cast party and the star of the movie, Gary Busey, performed. Everyone seemed to be having a real good time. Still, I went back to my hotel room with those now yellow newspaper clippings flashing in my head. It is still hard to believe what happened sixty years later.

Tweet
Published in The Archives
More in this category: « One Hit Wonders Before Becoming a Rock Star »