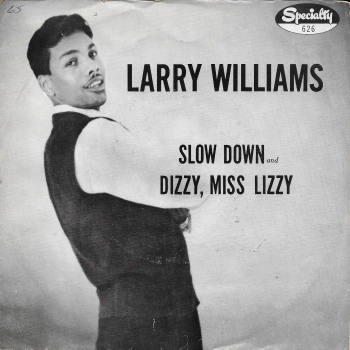 New Orleans where Larry Williams was born was a hot bed of music while he was growing up. Even though his family moved to California when he was a teenager, he returned to the city of his birth as soon as he was old enough to be on his own. It was there that he learned from the best that the music city had to offer and that was an amazing list. At first it was Lloyd Price who took Larry in, but it was Little Richard who helped him the most. It was Little Richard who got the very young (not even 21) a record contract with his label at the time Specialty Records.

When Little Richard decided to turn away from Rock ‘n’ Roll in 1957 and started preaching, the label thought they had a perfect replacement in Larry Williams. It certainly looked that way at first. He scored gold records with his first two singles called “Short Fat Fanny” and the follow up called “Bony Moronie.” Both were pretty much novelty tunes.

His better music didn’t do nearly as well, but that was the music that got John Lennon’s attention. It is still amazing to me that songs like “Bad Boy” (which didn’t even hit the charts but was a perfect fit for John), “You Bug Me Baby”, “Dizzy Miss Lizzy” (which only made it to #69), the flip side “Slow Down” (Both covered by The Beatles) and “She Said Yeah" (also didn’t chart but was covered by The Rolling Stones) didn’t make him a super star.

It was very sad that the music of Larry Williams was not appreciated in this country and yet he was idolized by the Brit stars.

Larry didn’t have much success with his music after 1957. He tried producing others including a comeback attempt by Little Richard, but with no luck. He even tried acting and had a couple of bit roles in the movies. His drug habit started to catch up to him in the 70’s. He even threatened to kill his longtime friend Little Richard over drugs.

Then on January 7, 1980, Larry Williams was found dead in his home from a gunshot (coincidently later this same year John Lennon would also die of gunshot wounds). Larry had apparently shot himself although there are those who maintain that he was killed in a drug deal that went bad.

Either way Larry Williams (and of course John Lennon)... deserved a better fate.