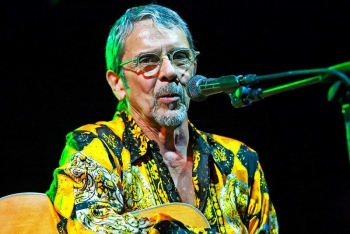 Anxious to launch his own career, Bobby started his own group while still working at Stax. His first group was a soul band called The Short Cuts and later they changed their name to The Counts. They played on a regular basis in the Memphis area until Whitlock was discovered by Delaney Bramlett who was part of a husband and wife team known as Delaney & Bonnie. The Bramletts invited Bobby to join their revue and off they went to perform in Los Angeles.

In 1969 Bobby Whitlock’s name could be found on Delaney & Bonnie’s two albums released that year called HOME and ACCEPT NO SUBSTITUTES as playing keyboards and doing some vocals. With the success of these albums, the group went out on a long tour using the name Delaney & Bonnie and Friends. The friends included some exceptional musicians in the business. Besides Bobby on keyboards, Jim Price and Bobby Keys played horns, Carl Radle bass, and the drummers were Jim Keltner and Jim Gordon. For the second half of the tour, the group became the opening act for the short-lived super group known as Blind Faith. Eric Clapton of Blind Faith really liked Delaney & Bonnie and started to sit in the group while they all did the tour together. When Blind Faith disbanded, Eric became a regular touring member. That tour eventually landed in London.

It was there that Bobby Whitlock’s really branched out. It wasn’t long after arriving in London that George Harrison used Bobby to play keyboards on an album by Doris Troy that George was co-producing for Apple Records. At George’s urging, John Lennon used Whitlock in his Christmas of 1969 concert.

Early in 1970 Delaney finally convinced Clapton to use the “friends” to record a new album. Blind Faith was now history and Delaney was pushing Eric to start a new band with Eric up front. Eric was always very reluctant to sing because he wasn’t very proud of his voice. As a result, on Clapton’s first solo effort his voice was not as up front as it could have been. His fans made it a hit.

By the middle of 1970, members of Delaney & Bonnie started to leave for groups like Joe Cocker’s Mad Dogs & Englishmen. Whitlock was the last to leave, but only did so when he got an offer he couldn’t refuse. George Harrison wanted Eric Clapton, Bobby and some of the other “friends” to help record one of the all-time great albums -ALL THINGS MUST PASS. Most of those same musicians also became part of Derek & The Dominoes. The group went into the studio to make the legendary album known as LAYLA AND OTHER ASORTED LOVE SONGS. If you check out the credits you will find that Whitlock not only played keyboards but wrote or co-wrote 6 of the 14 songs.

Derek and The Dominoes went on tour with Whitlock. The group however was doomed because of the bad drug habits shared by all the members of the band. Clapton broke up the band was went into a big depression. In 1971 Bobby tried with some success to launch a solo career. The two solo records didn’t go very far on the charts despite some good reviews. His second less than commercial album was produced by Jimmy Miller, the producer for the Rolling Stones. Jimmy decided to use Whitlock on the LP EXILE ON MAIN STREET but he was not given credit on the album cover.

After a couple more attempts at solo albums proved to be poor sellers, Whitlock decided to give up playing and retire in 1976. For most of the next twenty years he lived on a farm in Mississippi and raised his children. In 1999 he came out of retirement to record another solo album. Then in 2000 Eric Clapton brought Bobby back to England to play in a BBC special. Later that year legendary guitarist Buddy Guy used Whitlock on his album called SWEET TEA.

In 2003 Bobby Whitlock and his wife Coco Carmel teamed up to record and tour. They are still at it on a limited basis. The photo is of Bobby performing in BB King’s New York City club. It was taken by my friend Arnie Goodman. Check out his work on the website www.smugmug.com for more great photos.